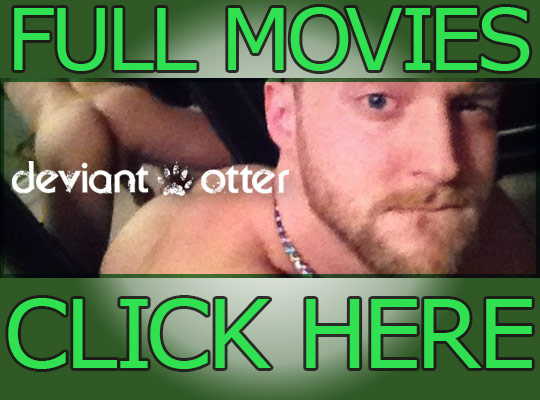 If you’re still tuned in you should remember this guy from the Drenched video I posted a while back. After getting our rocks off from pissing in and on eachother, we agreed we still have plenty of other activities we wanted to experience. I really don’t know what it is about feet, because I thought a foot was such a vanilla fetish, but holy fuck am I into a dude’s feet now, and I’m not mad about. So besides us smoking like chimneys, we got into a ton of foot stuff and then broke out my double headed dildo and decided to give it a go. And of course choking down on each otters’ cockss, pounding out our fuckholes, and my ass eating up Gastov’s load.

Behind The Smut: Fuck Errands

My man was supposed to be going out and running errands, but in true Pup fashion he was distracted by Ryan’s dick and would not get off of it, so I figured I might as well let him have his fun and have something else to share with you guys. More updates to come very soon, I promise!

Behind The Smut: Snack Break

Usually when I record a hookup at the house my man is able to join in on the fun because he works from home, but the day I was filming with Nick Milani he was wicked busy with work so it wasn’t looking like he would be able to join in on the fun and it was bumming out poor fella. But halfway through filming I was overheating and Nick needed snacks so we went inside to cool down, only to discover my man jerking off to us because one of his meetings finished early. So in true young slut fashion Nick was servicing my man’s dick within seconds and did not let him return to work until he worked out my man’s load all over his pretty face.

I am such a happy otter when Ryan Powers visits here in Fort Lauderdale. He has such a gentle, sweet, chill vibe to him, but when dicks and holes come out you’ll begin to notice he takes on a more aggressive/primal role and I’m all about it haha. In the past I’ve really only been the top for when we’ve fucked, but with my recent desire/determination to be legit 100% verse in 2020, he decided to test the waters and see how far I’m coming along with my ass training. Some posititions are easier than others, but they’re all starting to feel satisifying in their own way. I just want to be able to talk a drilling like so many of my porn heroes, so we have a lot of practicing this year!

If you use the apps I’m sure you’re no stranger to those handful of guys we go back and forth with, sometimes for weeks, months or even years, but for some reason we can never get on the same schedule. All the while we continue to talk and exchange pics and drive ourselves crazy by describing in graphic detail all of the deviant things we want to do to each other’s bodies. Well, thats been my case for the past year with this sexy tatted otter guy, Gustav…until last week! Over the past year we’d discussed plenty of raunchy things that we wanted to get into so after a year of making each other horny, we finally got to bang the fuck out of each other.

I’m sure this comes as no surprise, but I haven’t always been the most organized otter. Although I’m usually good about accounting for all of the raw footage after filming a fuck session, every now and then a few clips will fall through the cracks. So a couple days ago while I was cleaning up some hard drives I stumbled upon some footage of me and my otter form another, Chandler Scott. I honestly could not remember filming even one second of this footage, so I asked my Pup if he remembered where/when the footage was from and he couldn’t remember either…even though he was the one filming the entire time. Well, after taking a closer look at the footage it finally hit me, this footage was from first time me and Chandler ever got naked in front of a camera together. I remember at that time I was concerned about looking to sloppy, but we all know now what a hot mess I can be so I figured why not finally share it with you guys.

I gotta send some love to The Boner Guide for this one folks. Im shitty with who's who in the "industry" so I'm not as privy to who's fresh meat as I used to be, but I'm so thankful this dude was put on my radar. Long story short, The Boner Guide sent out a tweet saying that it would be so hot if me and Leo Rex did a scene together. I hop onto google, find Leo Rex's Twitter account, and I'm in lust, because he's dripping with ink AND has a British accent, so I'm already having serious FOMO. But the dude lives in the UK, and I can't afford that kind of trip, so I just tacked Leo to my fantasy list. And then, the universe decided it had to see us fuck because no more than two weeks later I was in San Fransisco visiting my buddy Nick, creeping on social media, when I saw that Leo just happened to be visiting the same city from the UK. So attention all viewers, tell me about your fantasy pairings and what you want to see, it gets me off getting you guys off, so send in them requests!